PLEASE NOTE: WE ARE CLOSED TO THE PUBLIC AND CLOSED ON SATURDAYS UNTIL FURTHER NOTICE. WE ARE STILL SHIPPING AS NORMAL, AND LOCAL CUSTOMERS CAN STILL COLLECT PARCELS MONDAY TO FRIDAY FROM 9AM TO 5PM. IF YOU NEED TO CONTACT US PLEASE EMAIL US AS THERE ARE NOT ENOUGH STAFF ON SITE TO ANSWER THE PHONES. 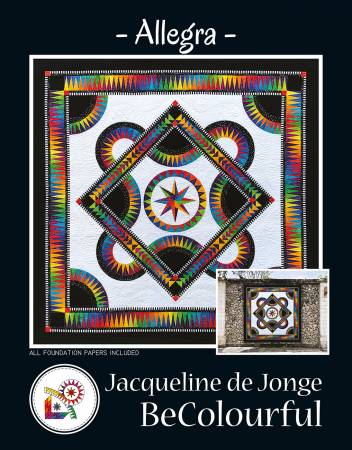 Only 1 left in stock

Jacqueline de Jonge’s quilts have been displayed worldwide and have won international awards.  They are based on traditional designs but with a contemporary and colorful twist.
In 2004 at the encouragement of her father, she entered the Open European Quilt Championship and won the Colour Trophy.  Since that year Jacqueline has lectured and conducted workshops throughout the United States, Canada, Australia and Europe.

Allegra finishes at 60″ x 60″. Every year Jacqueline revisits a Golden Oldie from the BeColourful pattern line. This year she decided to breathe new life into Blooming Tale. A Golden Oldie is always a pattern that deserves, in Jacqueline’s eyes, a second chance. The bright rainbow colors of the new Allegra and the changes, including a Rainbow border, makes her stand out from the past. Allegra is a gorgeous quilt and you will love to make her.

There are no reviews yet.

Be the first to review “Allegra” Cancel reply